Each Friday as part of this blog I share a few things that I have loved during the previous week. It might be a book, a film, a podcast or something less tangible like a behaviour or a feeling. This week’s post includes Radio X’s Best of British chart, a quote from Peter Drucker and the US comedy TV series Impractical Jokers.

Radio X Best of British: Being a music fan I loved the idea of this chart from the moment I heard about it. On Easter Monday between 10am – 7pm, Radio X played the top 100 songs by British artists as voted for by their listeners. Over 50,000 votes were polled and whilst the voting demographic heavily weighted the chart towards a certain band (cough, Oasis) it generated quite a bit of discussion.

I’m sure if you asked me again in a week, my choices might be different.

It would interesting  carry on the conversation so if you have a Top 3, let me know!

Peter Drucker: I’ve used quotes from Drucker in the previous posts but for those that don’t know him, he’s basically the father of modern management. Full of practical common sense advice, I would highly recommend any of his books, particularly the Effective Executive. 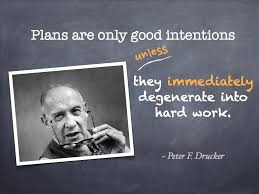 It’s relatively easy to make plans, the difference comes from those that then take action to deliver those plans.

Impractical Jokers: This US TV show seems to be creating quite a name for itself in the UK right now, so much so that the guys who star in it are touring the UK early in 2017.

My Son started watching this show a few months ago and the craze has caught on in the whole of our house. The basic concept is that there are four guys who get put in situations and then have to do what the others tell them to, no matter what it is. If they don’t they face a forfeit.

Rather than me spoiling it by trying to explain it further, just check out this video….

This site uses Akismet to reduce spam. Learn how your comment data is processed.